Across the Union, leaders pay respect to the life and ministry of Pastor Gordon Martinborough

On Sunday 8th August 2021 the Seventh-day Adventist community of Guyana and the wider Caribbean Union paid their final respects to the long distinguished Gospel Ministry of Pastor  Gordon O. Martinborough. The service was streamed live on the Guyana Conference’s YouTube channel; however, the live location was in the US state of Florida at the Spring Meadows Adventist Church.

Gordon Ornsley Martinborough was born on November 12, 1936, in Georgetown, Guyana where he spent his early life. Later he came to Trinidad and completed the Theology Course at Caribbean Union College (now University of the Southern Caribbean) in 1961 and returned to Guyana to serve as a Pastor in the Guyana Conference. He later completed a Bachelor of Arts in Religion and History (1972), and a Master of Arts in Church History (1976) at Loma Linda University.  His wife of 58 years, Waveney Martinborough has been his partner in ministry and readers can find videos of both Martinboroughs conducting family and marriage enrichment seminars and programs on various video-sharing platforms even up to the year 2020.  In 2018, the University of Southern Caribbean awarded Pastor Martinborough an Honorary Doctorate in Religion. 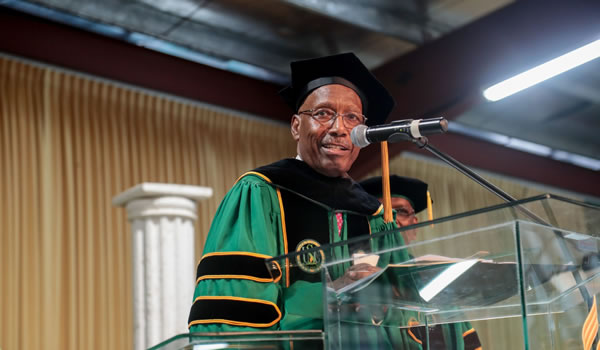 Pastor Martinborough has served at several levels of the Church. After returning to Guyana, he was elected President of the Guyana Conference in 1980, President of the Caribbean Union Conference in 1991, and Vice-President of the Inter-American Division in 1995. During this period of Church service, his contributions included University of Southern Caribbean Board of Directors Chairman, increasing college enrollment from around 300 in 1991 to over 1000 in 1995, negotiations with the Trinidad & Tobago Government resulting in the cancellation of $12,000,000 debt in 1994.

Dr. Martinborough was a scholar and writer; his Masters degree dissertation "The Beginnings of a Theology of the Sabbath Among American Sabbatarian Adventists, 1842-1850 by GO Martinborough - 1976 - Loma Linda University is a regularly cited work. His most notable book “I Love You, by Gordon O. Martinborough was first published in 1995 and released again in 2006 and is available on Amazon and other online bookstores.

Dr. Martinborough was described as a man who “broke down barriers of race and culture, using the simple principles of Jesus - first address a person's needs and then show them God. His books and materials have been translated into Spanish, French, Chinese, Vietnamese, and Burmese and used around the world, in the Caribbean, South America, Korea, Philippines (where tens of thousands were baptized) and in Caribbean-American, African American and Caucasian Conferences across the USA.”

A distinguished alumnus of the University of the Southern Caribbean (USC), the university shared on its Facebook page that “the University of the Southern Caribbean joins with the wider Seventh-day Adventist community in mourning the passing of Pastor Gordon O. Martinborough. Through his life and ministry, Ps. Martinborough embodied what it truly means to go Beyond Excellence. A dedicated alumnus, USC extends sincere condolences to the family and friends of Ps. Martinborough.”

CARU President Dr. Kern Tobias shared the following message. “Dr. Gordon O. Martinborough has contributed more than most to the evangelistic prowess of the Caribbean Union Conference. His Family Life and Health Evangelistic Series are timeless classics that will be relevant for generations. His works will follow him. Our prayers continue for Sister Waveney and the immediate and extended families.”

Others expressing condolences during the live online services included Paster Terry John, Vice President for Spiritual Development and Pastor of the USC Caring Church who shared ​"Condolences to the Martinborough family from the John Family and The University of the Southern Caribbean Church family. His life and ministry indeed a significant resource and gift to us all!" Sis Linda Tobias, Head of the Shepherdess Association of the Caribbean Union, posted to the Martinborough family that  "​The Caribbean Union Conference’s Shepherdess Association share this loss with you".  Contributions during the funeral service included a musical rendition by Courtney Fadlin, an internationally renowned Guyanese born saxophonist and salutations by Dr James Daniel, Executive Secretary, ASI Interamerica.

We give thanks to God for his service to the work of God. Our hearts and prayer remain with his family and loved ones.