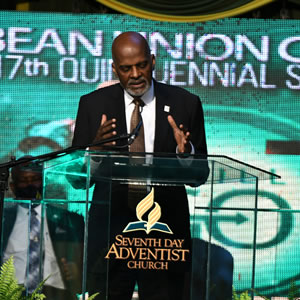 The 17th Quinquennial Session of the Caribbean Union Conference began at 3:30 pm, on July 20, 2022, with much fanfare at the University of the Southern Caribbean.

Almost 200 delegates and Local Conference Administrators were in attendance at the opening ceremony in the new USC Auditorium. The campus has been transformed with several feather flag banners waving in the wind sharing messages of the Adventist faith and heritage. Delegates from various Conferences and Missions expressed delight in God’s leading that allowed for an in-person session. 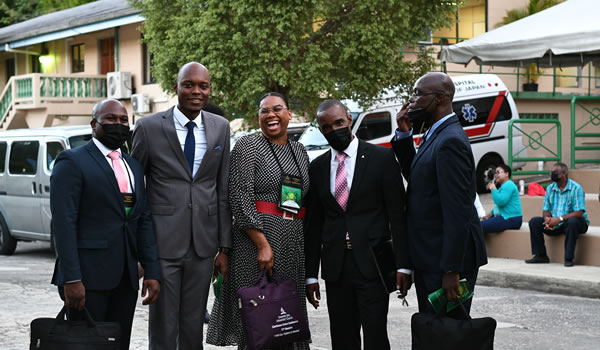 The special address was presented by the Her Excellency Paula-Mae Weekes, President of the Republic of Trinidad & Tobago, who was introduced to the audience by CARU President, Dr Kern Tobias. In her address, Her Excellency began by expressing ‘pleasure at being around so many presidents and not feeling out of place’ to smiles and laughter. Her speech with punctuated with several memorable anecdotes including ‘You (the Adventist Church) have served the wider community with distinction’, sharing ‘that many have benefitted from the programs of the (Adventist) Church’ and praised the church for many of the “programs of the church during the Pandemic”.

The sermon for the Opening Exercises was delivered by Dr Ellie Henry, President of the Inter-American Division. He shared the forward movement of the Division which requires us to work together ‘with enthusiasm as one’.

One of the highlights of the service was the musical selection by the CARU Children’s Choir comprising children from our primary schools and church community.

Among the online viewers, there was a general theme desiring God’s leading for the Session. “May God's wisdom prevails over this meeting”, “We are at the end so we want God's plan and not those of man” and “I pray that God would guide those who are leading out in these sessions over the next few days”.

The Opening Ceremony can be viewed on our YouTube Channel.