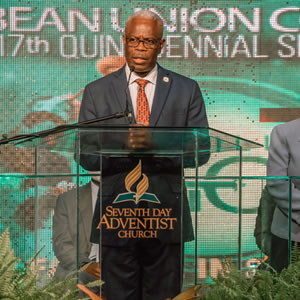 Late into the evening of the second day of the 17th Session, Dr Kern Tobias was re-elected to serve his third term as President of the Caribbean Union Conference.

Dr Tobias and Sis Tobias were invited to the platform by Dr Ellie who invited the President to address the delegates. In his address, Dr Tobias shared that “he considered it a privilege to be asked by God to serve in the Caribbean Union at this time”. He reminded the audience of his Christian education and shared that “God needs workers”. “Between ourselves, we have given 88 years of service; My dear wife as a teacher, myself as a pastor” which was greeted with applause. In closing, Dr Tobias promised to give his best to God as ‘it is He who matters most’ and ended in benediction to the name of the Father, Son and Holy Spirit. 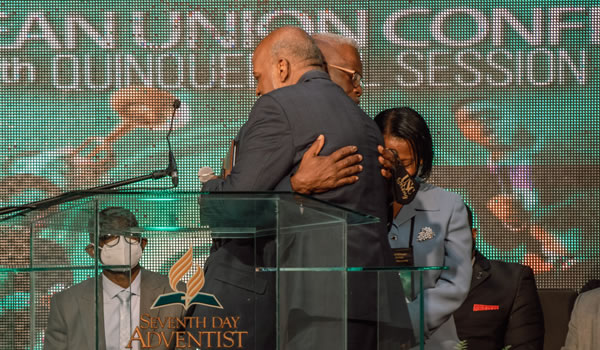 Just before the close of the night, the Nominating Committee recommended that Pastor Johnson Frederick and Pastor Bertie Henry serve as Executive Secretary and Treasurer respectively. Both names were moved, seconded and voted upon unanimously by delegates.

We encourage all members across the Union to keep Dr Tobias and his family, Pastors Frederick and Pastor Henry and their families in your prayers.