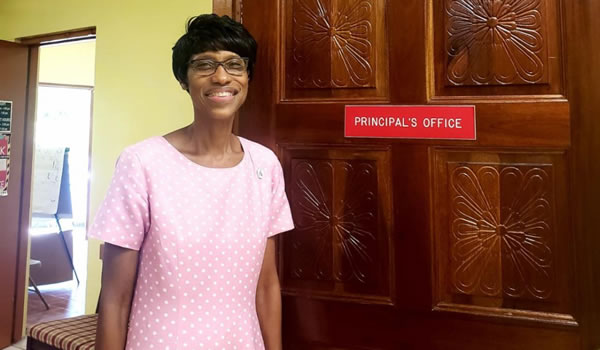 Reneé Hodge was always active in the service of the Lord and served as youth choir director while teaching on St. Thomas, and that service transferred with her as she became a member of the Miami Tabernacle Seventh-day Adventist Church.

The 2020-2021 School Year at the St. Thomas-St. John Seventh-day Adventist School (SDA School) began with a new principal at the helm.  Ms. Reneé P. Hodge has hit the ground running with every good intention to serve and make a difference at the educational institution.  Ms. Hodge is no stranger to the SDA School.  She started as a first grade student in the late 1960s when the school was located at the St. Thomas Seventh-day Adventist Church (now the City SDA Church).  After plans were made to purchase land, build a facility, and relocate to the eastern end of the island, Ms. Hodge, then a student in the fifth grade, actually worked with fellow students to help the adults working to build the school.  She and other young people engaged in tasks like sifting sand, sorting nails, and bringing water to the men as they toiled in the hot sun.  When the building was completed, Ms. Hodge was a student in the first Sixth Grade class to occupy the new facility.  She continued her education at the SDA School until the final two years in high school when she had to transfer to the one of the public high schools because the SDA School did not have eleventh and twelfth grades.

Upon graduation from the Charlotte Amalie High School in 1979, Ms. Hodge attended Oakwood College (now Oakwood University) in Huntsville, Alabama.  She returned to St. Thomas and began her career as an educator at the St. Thomas-St. John Seventh-day Adventist School.  She served as an elementary school teacher for several years and then decided to pursue a graduate degree at a university in South Florida.  After graduation, with her Master’s Degree in hand, she was employed at the Miami Union Academy as a teacher of the second grade.  Ms. Hodge always sought to keep her students engaged and made learning a “fun” experience.  In time, she was appointed as a vice principal and then principal of that institution.

Reneé Hodge was always active in the service of the Lord and served as youth choir director while teaching on St. Thomas, and that service transferred with her as she became a member of the Miami Tabernacle Seventh-day Adventist Church.  She immersed herself into the work of the church and founded and directed The Omega Singers, a choral group that ministered at many churches and events in the local area, the regional south, and the Caribbean.  She also served as director of the church choir.  Several years ago, she was ordained as a local elder of the Miami Tabernacle.  Ms. Hodge was so beloved by the members of Tabernacle that when she made the decision to return to her home island, she was treated to a farewell celebration that showed the level of love and appreciation held by the members of that church.  The choir room was officially named in her honor in recognition of the years of faithful service in the Music Department of the church.  Ms. Hodge served at the Miami Tabernacle SDA Church for more than thirty (30) years.

Ms. Hodge has come full circle with her appointment as principal of the St. Thomas/St. John Seventh-day Adventist School…the school in whose halls she received most of her elementary and high school education…the school where she began her career as an educator.  She is now taking charge as an administrator in the midst of a global pandemic where new techniques must now be employed to continue the process of learning.  Ms. Hodge has to plot a course in uncharted waters, but she is undaunted.  She is excited at the opportunity to be in a position to move the school forward as she relies on God and the faculty, staff, students, and constituency to achieve her goals.  Ms. Hodge refers to the school as “our school” and will work to engage everyone in making the SDA School the best that it can be.   One of her goals is to build upon the alumni association already in place and seek to make it even more vibrant by including all graduates of the school and reaching out to former students who attended the school but graduated from other institutions.

The St. Thomas/St. John Seventh-day Adventist School began its 2020-2021 school year with orientation on August 31st and classes beginning on September 1st.  The current enrollment is 140 students with registration ongoing. Classes have started with the students being instructed virtually in their homes as the teachers are teaching from their classrooms using Edmodo as the learning platform with Zoom serving as the bridge between students and teachers. Ms. Hodge has visited each class to observe the learning process and the use of technology to engage the students to keep them interested.  A new class in Programming has been added and is being taught by a graduate of the school who is residing in Tennessee.  Computers and tablets have been issued to students who were in need of them; however, laptops are still needed.

The theme for this school year is “TEAM:  Together Everyone Achieves More!” Principal Hodge is reaching out and encouraging the faculty, staff, students, and the constituency to join the TEAM to make this school year successful as they work together to prepare the students for life in this world and for the world to come!